Karima Holmes
Director
-A +A 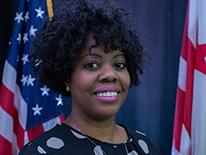 Karima Holmes was appointed by Washington, DC Mayor Muriel Bowser to serve as the Director of the Office of Unified Communications (OUC) in January 2016. OUC consolidates all of the city’s emergency 911and non-emergency and basic city service 311 call activities and serves as the only Public Safety Answering Point (PSAP) in the District of Columbia.  The OUC is responsible for the public safety communications infrastructure that ensures police, fire and emergency medical dispatch for the District’s 700,000 residents and its 20,000,000 annual visitors.

A seasoned public safety professional and recognized thought leader, Ms. Holmes started her career on the front line as a communications officer and quickly rose up through the ranks to serve as the executive director at PSAPs in large metropolitan areas in the states of Georgia and Texas, before accepting her position in the District.  At the OUC, Ms. Holmes overhauled the technical infrastructure, software platforms and critical programs, thereby evolving the District’s PSAP into an entity poised to embrace NG911 advancements, within months of her cabinet-level appointment there.  Highlights of this evolution include a complete telephony system upgrade, introduction of Text-to-911 and the execution of a new criteria based dispatching protocol.

With an eye toward supporting the national efforts around the industry’s migration to NG911, Ms. Holmes also recently joined the FCC’s Communications Security, Reliability and Interoperability Council (CSRIC) Workgroup VI, which has been challenged to identify measures to enhance the reliability and effectiveness of NG911 through routing redundancy and maintenance and mitigation of outage threats to both legacy 911 and NG911 systems.

Also, during her short tenure with the OUC, Ms. Holmes has fortified collaborative relationships with nearly 30 local and federal law enforcement agencies, deploying the PSAP’s cache of 8,000 radios dozens of times for major National Special Security Events (NSSE), such as the 2017 Presidential Inauguration and multiple State of the Union Addresses, to name a few.  Responsible for supporting the Secret Service and all presidential movements, while maintaining radio interoperability with public safety entities across the National Capital Region, the OUC handled a combined 3.1 million 911 and 311 calls and 12 million push-to-talk transmissions in 2017.

Ms. Holmes has both a B.A. in Criminal Justice and a Masters of Public Administration with a concentration in Homeland Security, as well.  She also holds an Emergency Number Professional (ENP) Certification from the National Emergency Number Association (NENA) and is a Registered Public Safety Leader (RPL) with the Association of Public Safety Communication Officials (APCO).  Director Holmes also currently serves as the Vice Chair of the Metropolitan Washington Council of Governments (MWCOG) 911 Directors Committee and as the District of Columbia’s state representative with the National Association of State 911 Administrators (NASNA).

In October 2019, Karima Holmes was appointed to the FirstNet Authority Board by United States Secretary of Commerce Wilbur Ross.  Selected for her public safety expertise and substantive technical experience, in this role Ms. Holmes supports the development and operation of the country's first nationwide public safety communications platform dedicated to first responders.